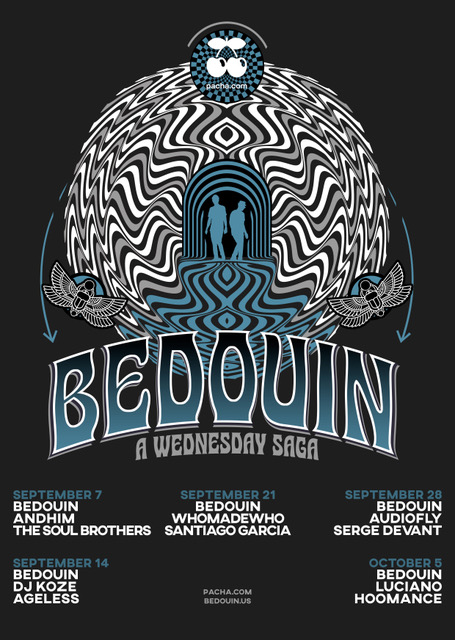 After its big move to Pacha, Ibiza Bedouin’s enchanting Saga party has been the most talked about on the island and now it announces a huge closing on October 5th with Swiss-Chilean legend Luciano. Between now and then, the likes of DJ Koze, Audiofly and more are all still to play.

Formed by Rami Abousabe and Tamer Malki, Miami-based duo Bedouin has been bringing their own fresh sound to the scene for years. Their unique mix of spellbinding melodies, fresh rhythms and a blend of their Middle Eastern heritage and Western upbringing has made them into a globally renowned duo.

At the same time, their own Saga party has gone from strength to strength since starting in 2017. For the first time this year, the party arrived at Pacha and scaled-up its ambition with a magical Middle Eastern-inspired experience infused with incense, soft and warm lighting and an enticingly beautiful, dramatically fresh and infectiously blended soundtrack each and every Wednesday.

There have been many highlights already this summer such as an epic Deep Dish reunion that saw house heroes Dubfire and Sharam reunite in style, a magical back-to-back between Bedouin and Crosstown rebels boss Damian Lazarus, a next level live show from Innervisions man Henrik Schwarz and Nathan Daisy appearing as a special guest.

Now, the special Saga series rolls on with many standout parties to come: September sees Bedouin joined by the likes of ANDHIM, DJ Koze, Ageless, Audiofly, Serge Devant, The Soul Brothers, WhoMadeWho, & Santiago Garcia. The grand finale is on October 5th with Cadenza label head Luciano bringing his stripped back and Latin tinged minimal sounds next to Hoomance.

Later in the year, the acclaimed pair are also set to unveil their long awaited debut album. It will be a deep dive into their famously rich and musical house sound with all of the worldly influences and cultural references that are now expected from the innovative producers. It shall also be including some widely acclaimed international artists (to be announced very soon)

Amongst the rest of their headline sets for Saga at Pacha, the pair have also had a busy tour diary that has taken them to Mykonos, Egypt, Marseille, Marbella, Düsseldorf, DC-10 and Hï Ibiza amongst many more places between now and the end of summer.

It has been a ground breaking year for Bedouin, but there is still plenty more to come from the influential pair.

Lineup for the rest of the season:

Lester Fitzpatrick Is Doing The Work

From Relief & Dance Mania to UKR, Lester Fitzpatrick has become one of the most prolific underground artists in Chicago and probably the world. He's not slowing down. And this is how he does the work. The post Lester Fitzpatrick Is Doing The Work appeared first on 5 Magazine.