BluePaper Returns to WTR with Sunsets In Marrakech

One of the most talented electronic music producers to emerge out of the Middle East in the past few years, BluePaper is the gift that just keeps on giving. Following the internationally celebrated release of his five-part Elephant Rock EP in March 2022 – and an exquisite contribution to the subsequent remix package which followed in June – the burgeoning Saudi talent now looks to expand on the success of his first two releases on WTR, as he unveils the next single in his ever expanding musical arsenal – Sunsets in Marrakech.

Steadfast in his resolute commitment to originality, BluePaper’s impressive musicality shines front and centre, together with his long-standing affinity for organic, arabesque, electronic soundscapes. Delivering a beautifully nuanced underground house cut awash with warm polyphonic textures, beautiful harmonies and a steady groove that bolsters the record throughout, BluePaper’s latest offering is an absolute masterclass from the off; its pulsating heartbeat and ethereal character sweeping and soaring with intense delight.

Staying true to his roots, BluePaper takes the listener on a deep, emotive journey across the single, which finds an undeniable high in its beautifully crafted breakdown. Made for the dancefloor with its warm basslines and hypnotic beats, the record shows confidence but at the same time feels honest and fragile. Subtle yet immense, Sunsets in Marrakech is produced with the poise and elegance of an artist who has been captivating hearts and minds across the Middle East, and beyond, over the past few years.

Speaking about the record, BluePaper commented:

“Sunsets in Marrakech is an ode to my absolute favorite city in the whole world. Marrakech was the very last place I visited right before the Covid lockdown in 2020 and holding onto its fond memories really helped me find tranquillity in the midst of the darkness that followed. Deeply haunted by the side winding alleys, long and narrow passages and the vibrant souls that wander between its venerable red walls, and inspired by the days we spent at the rooftop terraces of the old Medina; hypnotized by the allure scenery of el-Fnaa square, while the sun goes down.”

Sunsets In Marrakech marks the latest record in a run of first-rate output from WTR, who have been going from strength to strength with each passing release this year. Established by MDLBEAST Records in March 2022 as a home for Arabesque electronic music, WTR has enjoyed a run of critically acclaimed releases from artists across the Middle East and beyond, including ZONE+, Shkoon and Rashid Ajami.

BluePaper – Sunset In Marrakech is out now via WTR.

The post BluePaper Returns to WTR with Sunsets In Marrakech appeared first on Only Techno. 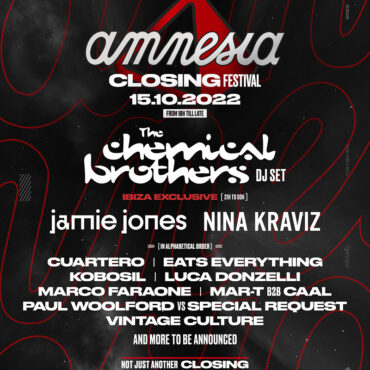 Summer 2022 has proved one of the best in recent memory for Amnesia, but soon it must come to an end. In true Amnesia fashion, though, the last hurrah is not just another party, it is an epic Closing Festival that will match the monumental event that was the opener. Starting at 6pm on October 15th, this final musical adventure features an Ibiza-exclusive DJ set from The Chemical Brothers, an […]