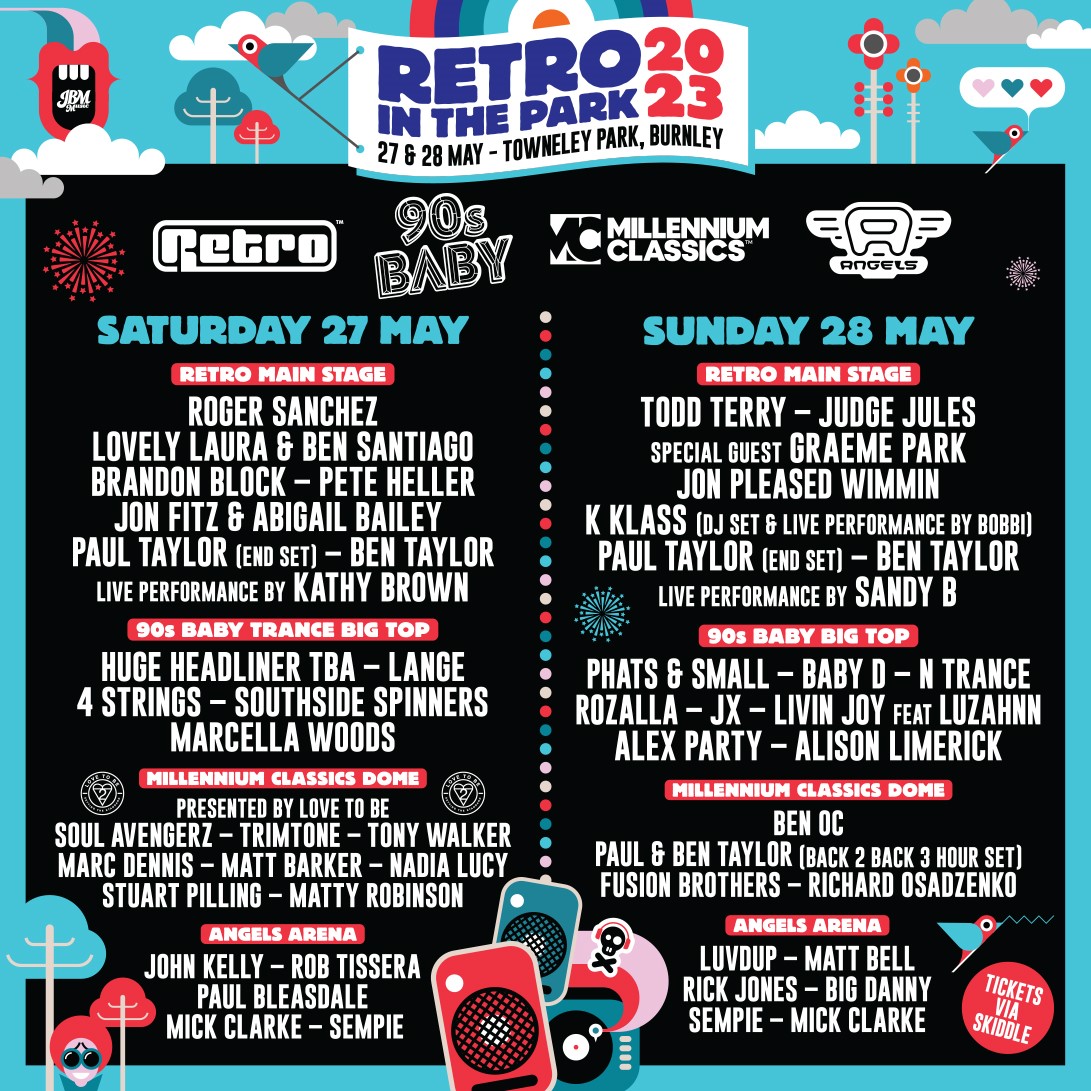 The finest celebration of old school music Retro In the Park, welcomes tens of world class DJs and live acts across four stages

Tickets are on sale now and will sell out so move fast to get yours at https://retrointhepark.com/

The newly expanded two day event offers even more chances to get immersed in those unforgettable old school sounds and good time grooves . It goes down at Towneley Park, the largest park in Burnley with 180 hectares of lush green rolling fields that will become a real party haven.

Each stage at the festival will have its own look and feel, with cutting edge production, punchy sound and immersive lights all bring each one to life in a unique way. On both days, the most authentic old school brands in the scene will host their own stage.

90s Baby takes you back to that golden era like no other, with a wide range of the decade’s biggest live acts, all reunited for an unmissable event that will transport you back to your youth. Across the weekend the likes of Lange, 4 strings, Phats & Small, Baby D, N-Trance, Allison Limerick and a huge guest to be announced will all play.

Millennium Classics Dome is an event series dedicated to the sleek house sounds of the 2000s right up to the present day with all the biggest hitters lined up. You can expect scintillating sounds from Soul Avengerz, Trimtone, Ben OC, Paul & Ben Taylor (Back 2 Back 3 hour set) and more across both days.

Retro is the cult and long running party helmed by Paul Taylor. It’s a cultured celebration of all things house from across the ages with plenty of classics and favourites from stars of the scene. He will play as well as the likes of Roger Sanchez, Lovely Laura & Ben Santiago, Brandon Block, Jon Fitz & Abigail Bailey, Peter Heller, Judge Jules, Todd Terry, Graeme Park, Jon Pleased Wimmin, K-Klass (Live + DJ Set) plus live performances by Kathy Brown and Sandy B.

Angels is a well-respected and historic club brand that very much defined clubbing in Burnley during the 1990s. Across the weekend it represents all things house whether hard, funky, vocal or uplifting from John Kelly, Rob Tissera, Paul Bleasdale, Luvdup, Matt Bell and Rick Jones amongst more.

The scene is set for the most comprehensive and escapist celebration of all things retro yet, so make sure to get your tickets booked for this unmissable throw down.

BONDI & Save The Kid Release ‘Crystallized’

With the critically acclaimed release of his inaugural album single Turning Blind back in September, followed by an incredible flurry of new singles every fortnight since, hotly-tipped German artist and JUNA POLY label boss BONDI now drops his latest collaborative vocal cut, Crystallized. The sixth official single to be lifted from his forthcoming debut album Space Logic, due in 2023, Crystallized – recorded alongside Italian-born, Berlin-based, singer-songwriter Save The Kid – is the sophomore collaboration between these two hugely talented […]